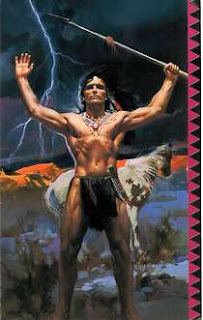 This one has it all. Loin cloth? Check. Mystic animal? Check. Man seeming to control the weather with his, er, staff? Check, check check.
This is from one of those romance novels called The Spirit Path


As Shadow Hawk lay there, his eyes closed against the pain, the Spirit Woman's image appeared before him. He had not been able to see her face clearly, only the glow of sun-gold skin and a riot of curly hair as black as the wings of his spirit bird. And even as he watched, the shadow of the black hawk he'd seen in his vision seemed to merge with the woman, and he heard a voice in the back of his mind, the voice of the shadow hawk...

She is waiting for you. The words were on more than the merest whisper, yet they rang loud and clear in his mind. You cannot fulfill your destiny without her.

Who was she? Why did her image intrude on his prayers and dreams? What power did she have over him, that he could not forget her; what magic did she possess that made him think of her day and night? What did she want of him?
Wow.  From what little I could read on Amazon, it sounds like she owns a Lakota dictionary

.  It got awesome reviews, so if you're home alone with your cats...(Or you could just go to a 49 and write your own damn romance novel)

Oh, wow, there's more: http://www.madelinebaker.net/bio.htm
Comanches, Apaches, 'Akotas and Cheyennes all falling in love with white non-native girls.  This is what all bored, white-bread Non-Native, middle-class, suburban, soccer-moms think about in the shower, ennit?
By the way, this is Madeline Baker. 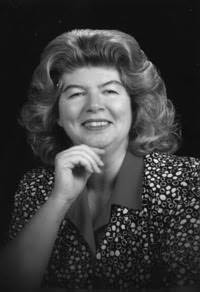