5 Signs your new FB friend is a pretendian

They use a Kirby Sattler painting as their profile picture.

Wow, don't you just feel enlightened now?
Maybe you should try doing few yoga poses while watching to get the full effect.
I'm in "corpse pose" right now!
I will probably be featuring a lot of that "art" soon.  I really don't get the whole "Native Spirituality" youtube video thing, but then again, I don't understand why church services are on television, either.
They regularly tag you in photos like this one:

And this is supposed to be a compliment.
They own a headdress like this:


Or this:
Or this:
Wow, those are some glazed looking hipsters...Oh, wait, no, those are mannequins.  My mistake.
Their weekend Pow-wow videos look something like this:

I've been watching this over and over; I'm more confused each time.
What the hell are they doing?
This is a pow-wow in Zuromin, Poland of all places.
The drum group, Dead Dog Singers, are from the Czech Republic.
Can somebody please tell me why?
Posted by The CBear at 12:20 AM 5 comments:

Today's post makes no sense  Why should it?  It's 4-20 and I reserve the right to be as incoherent as possible, but in all honesty I never was that coherent to begin with.  Disclaimer: the celebration of 4-20 does not mean the Blog Author advocates illegal activity of any kind...I just think it's funny.

Here's some brightly colored images for you to stare at.

Whoa...
Anybody else thinking about the end of the world?

These rocks glow in the dark!
I realize this picture has nothing to do with Native Americans at all, but they're rocks and they freaking GLOW IN THE DARK!  Isn't that just mind blowing?

This thing is creeping me out...


It's like somebody's handbag came to life and tried to start a conversation with you.
I can't tell if this is "Native Inspired" or not, the description is too damn long for me to read with that thing staring at me, but it costs $2,777.00.

I found this while looking for Iktomi. This is not him, but don't worry, he'll turn up.


And for the munchies...
Yes, Cupcake Teepees with SPRINKLES! 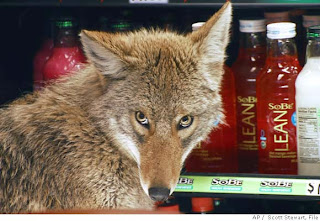 Coyote the Trickster, we've all heard the stories about how he tricks Iktomi out of his roasted prairie dogs

or how he stole fire or his hundreds of other stories.

(Wait, why is there no awful spider art? Believe me, I've been looking.)


Anyway, here are some "Awful" ways to express your connectedness to the coyote.  Disclaimer:  The blog author is not responsible for any wackiness that may occur in your life for embracing coyotes.


Getting in touch your inner Coyote...Or preparing for Coachella?
This woman says, "I can create headdresses such as this from just about any tanned fur you hand me. Bobcat, wolf, mountain lion, bear, African black-backed jackal....you name it, I'll do it (so long as it's legal, of course!)."

Wait, I found this trolling on Etsy... Yes, it is the same woman and still very creepy.
Her listing claims this is "Perfect for Halloween, religous purposes, Burning Man, bonfire parties, Pow-Wows, costume parties, re-enactors, cosplayers, or anyone who wants to feel more in touch with their inner animal."   The misspellings are hers.

Um...What?  I must have missed the Roadkill Pow-wow.  Do they hold that off of the Will Rogers Turnpike?

But is it as bad as this?
Oh but he looks so happy!  You know, with his severed head hanging on the wall.  Yup, happy.
Somebody wants this in their house, if it's any of you, please do me a favor and never invite me over.

Not Dooney & Burke...
Ever think, "I could use a handbag that can elegantly sheath my 6-8 inch knife.  Those Burlington Coat Factory sales just get really rough sometimes, you never know when you might have to gut someone for taking the last pair of size 8 1/2 tiger print horse-hair pumps."  The dead coyote in this case would just be a warning to others.


Sometimes, I can't decide if something is scary, awful, awesome or all three.


When I see this, all I can think about is devouring Frank the Bunny.

Not Felipe Rose:
The website says, "This artifact is a wild and exceptional display piece! This impressive wall mount comes from Native American artists Super Moon and Black Wolf. It is part of a limited edition, number 20 of 500, and features a hand painted lost wax image of an American Indian Warrior."
Now, I'm not going to claim know every Indigenous artisan out there, but Super Moon?  It doesn't say what tribe(s) the artisans belong to, either, which always strikes me as odd, especially when there's that whole Indian Arts and Crafts Act of 1990.
(please correct me if I'm wrong about this)
However, the site does go on to explain,"Native Americans have always felt a special connection to nature. The belief that all things have a spirit is an integral part of their religions. The Zuni believe that animals are more like the Zuni deities than is man. They also believe that animals have more power than man and that these powers, both practical and spiritual, reside in their totems."
Um, what do the Zuni have to do with this exactly? Hey, but he has horse hair, bison mane and coyote fur and for the low, low price of $361.95 plus shipping he can be yours!  I recommend hanging him in the guest room.

In the seventies, it was cool to be an "Indian", unless, of course, you happened to be an Indian.

I happen to know some Apaches.  I can say with some certainty, there's nothing Apache here!  Check out the shiny, blue fringe on Mr. "Butter Popcorn".


No Apaches here, either!
Did you catch the play tent?

This could be the Hipster Pretendian Theme-song:
Perhaps Ke$ha will cover it next!
Don't you just  love the Album art? Thankfully, we're spared the video with this one.

Of course, that is a re-make of this song:
I know it's from 1968 and not disco, but it's just too awful not to include.

What's a disco post without The Village People?
Felipe Rose honors his heritage by dancing in a loincloth, again.

Oh, but we've come so far since the Seventies, right?

This is a Norwegian band called Wig Wam. I'm just as confused as you are.
Look them up on You tube if you're bored or really hate yourself.
(btw- that guy's shirt says "I Chief; You Nothing!" or something to that effect, I found it odd.)
Posted by The CBear at 7:00 PM 19 comments:


Blog goddess note:  This post comes on the heels of Newspaper Rock's post on "Land theft in My Little Pony".  Yet another chunk my childhood has bee marred by bad writing and racism.  And here I thought Shia LaBeouf was the biggest threat to my innocent memories.

N.A. Action Figures Pt 1: The Not so Changing face of Spirit Iron-Knife

Think about Native American Action figures.  What is the first thing that comes to mind?  Spirit Iron-Knife, of course!  If you were a child of the '80s, like me, G.I. JOE was a big part of your childhood along with He-Man, Transformers and, oh yeah, Star Wars.  G.I. JOE had a Native guy, though.  Okay, so he was a walking stereo-type with bird.  What is up with the bird, anyway?  I've never met a Native American falconer, have you?
This Spirit was a mail-away, ah, remember those?  He's still kind of pale and would you look at those eyebrows!  I wonder if he can use them defensively?

Admittedly, this is my favorite sculpt.  Plus, I have weakness for 12" figures since I can make clothes for them or swap outfit from other one.  Not that I do that.  Okay, so maybe this really is just a boy Barbie. Don't judge me!

Wow, this one looks normal except the bear-claw necklace, oh, and that damned bird!  His special ability this time is whistle carving. 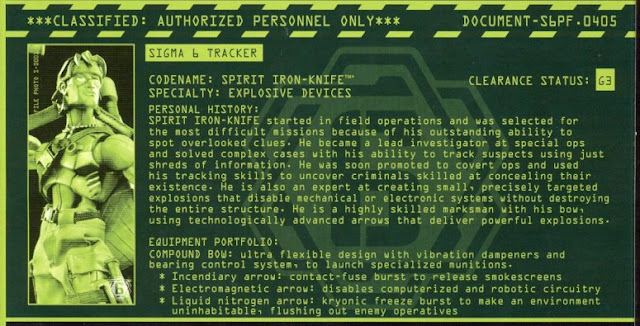 So, this one, while sporting a dynamic sculpt, not only has an eagle, but a bow and tomahawks!  Lookie, he's even got face paint and tattoos because he's exotic and mystic like that.

Same mold as the 2005 version, same file-card text, too.  However, the illustrations was new, too bad he looks like an Eastern European weight-lifting super-villain with a tan.   At least, he didn't come with a bird.

Doesn't he look a bit like a confused old guy?  This is a back-to-basics sculpt and the file card reflects that, too, except for the omitted opinions on modern psychology. 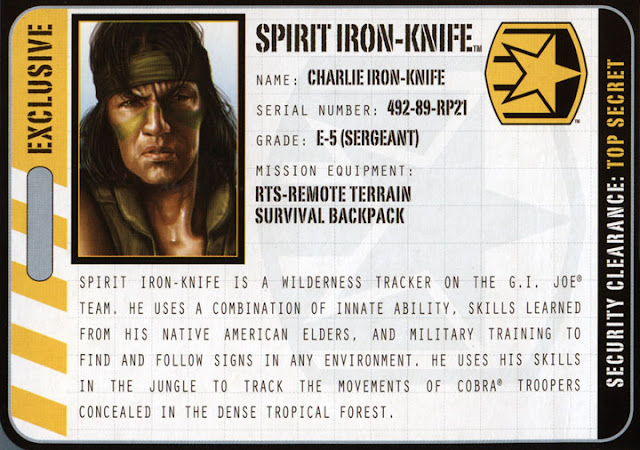 Honestly, this Spirit, a Toys R Us exclusive, seems pretty benign until we gear him up. 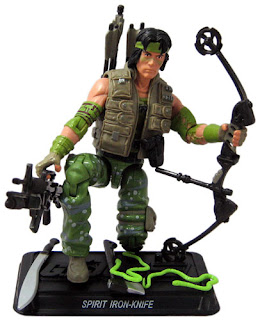 Great, another tomahawk, and they almost got it right, too.  What's up with the snakes?

Just because they're plastic stereo-types, doesn't mean we can't have fun with them.  Spirit 2008 and 2005 make an appearances in Ian Skorodin's Crazy Ind'n The Sequel  alongside the The Corp's Tracker Tom as leading man. Enjoy!

Blog goddesses note: For this post I do have to give credit to http://www.yojoe.com/  and the collectors who submit their photos.  Yes, I do own action figures, more than I would like to admit to, perhaps.  Then, I married a Star Wars collector and my fate was sealed.
Posted by The CBear at 1:30 AM 1 comment: