Why does it bother you so much? What's the big deal?

Yes, I've been asked the questions several times.  "Why does it bother you so much?  What's the big deal?  Where's the harm?" 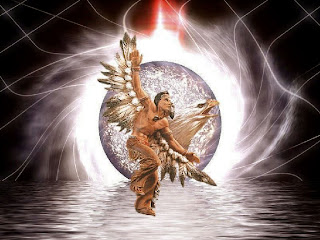 Well,  for the most part, images like this one on the right, perpetuate a harmful set of ideas:

1. Real Indians are Dead.  When we associate Native Americans with this fanciful image, we ignore the real Indigenous people around us.
While it would be easier if to identify Native Americans if they all wore feathers where ever they go. It's just not practical and can lead to unprovoked cat attacks.
Also, sadly,Walmart will not allow pet eagles, or wolves, in their stores.  However, they will allow this, go figure.
2. Native American spirituality is simplistic.  I have to laugh about some of the strange ideas about Indigenous Religion. Sadly, our own history books over simplify Native American beliefs in such a way that it is perceived  as a series of bizarre and naive practices.  Spirituality varies greatly from tribe to tribe.  However, most of my Indigenous friends have told me there spiritual practice is more of a way life than an organized religion.

Let us not forget, the American government made practicing Native American religions illegal as part of their attempt to "Americanize" Native Americans.
3. Savage Booty exists.  Sorry Charlie, sex is universal and we all, animals included, do it pretty much the same.  (Well, except spiders, spiders are all kinds of weird!) I know there are soccer moms out there daydreaming about a man in pigtails riding on a horse wanting to do freaky things to them.  Madeline Baker built a romance novel empire around the fantasy.  Sadly, I know some of guys are going to be mad at me for saying so, Savage Booty is a lie.  The weird, explicit ceremonies outlined in the ever popular Hanta Yo are also lies.  Yes, there are Twin-Spirit people.  However, their cultural significance should be interpreted as inclusion (something dominant culture should emulate) rather than sexual deviance.

Authors note: I'm sure there's more.  I'd love to keep going, really I would.  I've been drinking Tussin DM straight from the bottle for two days.  It seems to be affecting my writing ability.  Please don't tease me about my dysfunctional spell-checking and editing abilities. CBear out.

Update:  Since so many people are reading my cough-syrup induced ramblings, I wanted to insert a link to Rob Schmidt's 2003 article on  "Kinky Indian Sex".  Enjoy.
Posted by The CBear at 8:12 PM