Guess who's back and giving workshops in Sedona next month?
Yes, she did just invite you to gather around her cedar womb.  Seriously, I can't make this sh*t up.  Doesn't she look like Mardi Gras threw up on a taxidermist?
All jokes aside, this Grandmother Drum White Eagle Woman charges $795 for 5-day workshops teaching things she can't even begin to understand.  She claims to be Seneca, she is not. Check her schedule.
Here's some of the lovely, hand-painted, leather Hand-drums you can buy on Grandmother Creepy Owl's website (I'm sure the proceeds go to her legal defense fund):
And then there's this one, Kiesha Crowther aka Little Grandmother:
What's up with the microphone that resembles a giant mole?  Does anybody else find it weird she has her own flag behind her?  Wait, did she just say "crystal skull

?"  I once had relative with dementia who thought all the movies she saw in her life had actually happened to her, too.
She really likes crystals and says "These crystals, they carry such a huge love vibration..." 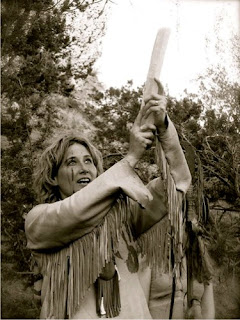 Well, if all she needed was "love vibration", I could recommend a few shops on ebay... 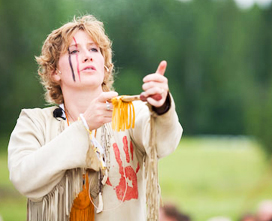 And after watching that video, aren't you kind of wondering what's in that pipe?   btw- I've been told girls are not even supposed to touch the pipe, let alone smoke it. 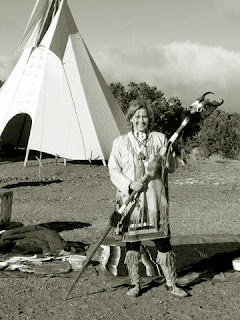 Nice Minnetonkas.  You'd think at her prices, $295 a person for weekend conference, she could afford some real moccasins.  You can find more crazy on her website.  She claims to be the "Shaman" for the Salish and Sioux tribes.  Sioux tribes?  As in all of them?  Obviously, that would never happen since "Shamans" are from Siberia.
Here's a little note of explanation for my Non-Native friends:  If for some reason you find yourself attracted to  Native American religious practices, please stop and consider why that is.  There are plenty of Pagan and Neo-Pagan paths you can follow.  Pagans throw great parties.  You can revere the Earth without disrespecting Indigenous people.  If you still feel drawn to Native beliefs don't expect to be welcomed.  Let me clue you in a small detail, religions that don't teach of eternal damnation have no motivation to share with you.  Besides that, Native Religious practices were illegal in this country until 1978.  People have suffered to keep that hand hold on their culture.  Please, don't act entitled to it.
I asked my friend, Choctaw Activist and writer, Ben Carnes for his thoughts on the subject.  Here's what he had to say:
"There are no quick fixes to the problems they encounter in their daily lives until they are willing to change certain aspects of their life. Our religion or spirituality isn't really either, it is a way of life that doesn't come modular in any shape or form.
Once someone has mixed and matched for their own agenda's, then it loses its meaning and significance as was originally intended. Which is one of the reasons, you will never find it on the marketplace as a seminar, workshop or even a book. If they pay for a weekend retreat, then it just becomes the beginning of a scam to boost someone's status or pocketbook, or even to take sexual advantage of another.
The people who have complained that we don't share have not been listening to us, because they don't want to hear what it is we have been saying, so until they slow down and stop to listen, they will never proceed any further and there are no short-cuts!
When Native people come out and complain or protest about the actions of frauds like Keisha Crowther or myths about the Rainbow Warrior Prophecy, instead of marginalizing Native people, maybe stop and consider there is merit to their arguments. Otherwise, they will have joined the ranks of exploiters who will bring harm to others."
I'd like to thank Ben for sharing his words and my readers for sticking with me.  I <3 you all.
Posted by The CBear at 12:12 AM